The MAX30001 and MAX30003 are Maxim® advanced-ECG, highly integrated analog front ends for use in wearable medical devices. By simply adding a few components, these solutions can match the most advanced ECG Holter-based products.

The use of a Wilson's Central Terminal (WCT) based active right leg drive (RLD) circuit is an established practice when designing electrocardiogram (ECG) devices. This application note describes an external WCT/RLD circuit that can be added to the MAX30001/MAX30003 ECG analog front ends. The circuit increases the quality of the sinus rhythm waveforms developed within a multi-lead ECG Holter device or ECG health patch by reducing the amount of interference from 50Hz and 60Hz line noise sources near the body.

Either two or three single-lead MAX30001/MAX30003 devices can be used in a parallel configuration to provide the necessary biopotential channels to create a traditional 3-lead Holter. If the third lead is derived, use two devices in a configuration similar to Figure 1. 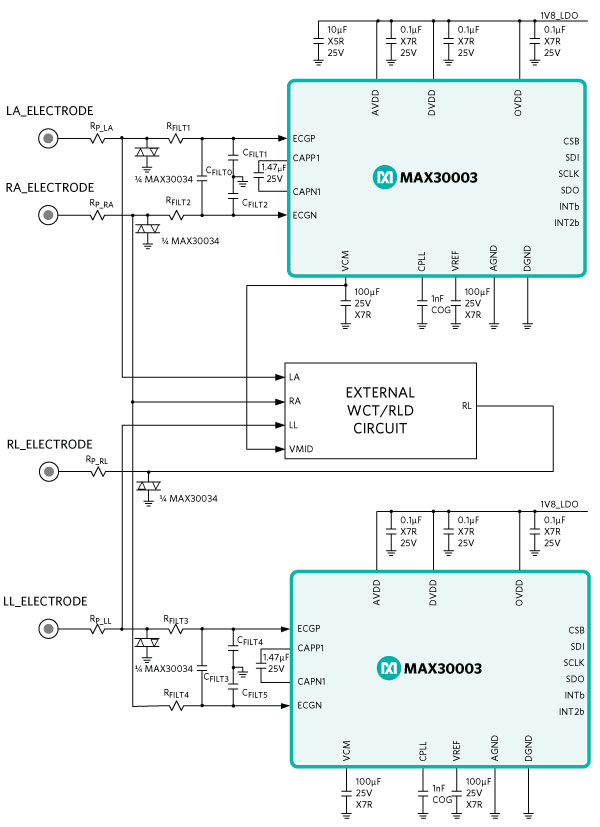 The circuit in Figure 1 uses a WCT-style common-mode detection technique. This technique was initially developed by Frank Wilson in 1934 as a theoretical reference point representing the potential of a virtual electrode located at the center of Einthoven's triangle (approximately in the middle of the thorax). Wilson and his team used this theoretical reference point as a reference electrode potential (the (-) input) for developing the differential precordial lead voltages V1 through V6 for 12-lead ECG systems. The WCT potential is created by averaging the potentials at the three limb electrodes on the right arm (RA), left arm (LA) and left leg (LL), which is calculated as

. Later, this WCT potential was also used as a convenient point for measuring the amount of common-mode interference from nearby 50Hz and 60Hz noise sources (i.e., lighting, computers, electrical outlets) coupling onto the skin. Biological signal amplifiers like the MAX30001 measure very small electrical signals emitted by the body, such as the ECG sinus rhythm wave. Unfortunately, the human body can also act as an antenna that picks up electromagnetic interference (EMI), especially 50Hz to 60Hz noise from electrical power lines.

To illustrate the impact of noise, consider an ECG sinus rhythm wave that has been corrupted by line noise interference. In this example, the signal of interest is fairly small in magnitude. For most normal sinus rhythms as well as arrythmias, the signal magnitude is generally less than 5mVpp and can be as small as 100µVpp. Because the signal of interest is so small, it is not uncommon to have noise sources that are similar in magnitude to the ECG sinus rhythm waveform. Noise sources such as line noise, baseline wander and motion artifacts, and muscle-based electromyographic action potentials can cause significant deterioration in ECG waveform quality1.

The WCT-based RLD circuit delivers a signal 180 degrees out of phase with any common-mode noise interference that the WCT picks up within the RLD amplifier's bandwidth. This significantly reduces the magnitude of line noise interference under many conditions. Ideally, the AFE differential input amplifier fully rejects common-mode noise, so the WCT-based RLD circuit provides little value. However, finite amplifier input impedances that work against mismatches of electrode tissue interface impedance from the limb electrodes cause some of the common-mode noise to be converted to differential noise. The AFE's CMRR is quite high but finite, which contributes to the conversion of common-mode noise to differential noise. As such, some design teams choose to add the cost of an additional electrode to help manage line noise. The additional electrode is often attached to the right leg (RL). It is recommended that in normal conditions, when all the electrodes appear to be attached properly, that the RLD circuit sets the body potential. Active common-mode noise rejection can also be employed under normal conditions.

For wearable biopotential measurement systems such as ECG Holter monitors, cardiac event monitors, cardiac telemetry devices, and ECG health patches, it is important to set the body potential because these systems are all operated from a battery. Battery operated systems float on the body. Drive the body potential with the RL electrode to a suitable voltage relative to the ground and the power supply voltages of the amplifiers within the MAX30001 or MAX30003 AFE to guarantee that the input amplifiers operate within their linear range.

For example, if one sets the body potential at the midpoint between the amplifier's power rail and its ground in the MAX30001 and MAX30003, one can use the VCM output voltage as a reasonable representative of the midpoint of the input amplifiers linear input range. If an RL electrode is not used, the body potential can be set using the programmable lead bias resistors controlled within the CNFG_GEN register in the MAX30001/MAX30003 input mux. The use of the third RL electrode allows one to not only set the body potential but also to use an active RLD circuit to reduce or eliminate line noise interference by actively cancelling it, similar to noise-cancelling headphones.

Figure 2 shows a circuit that implements an active RLD using a WCT-style common-mode signal and an associated common-mode cancellation technique. 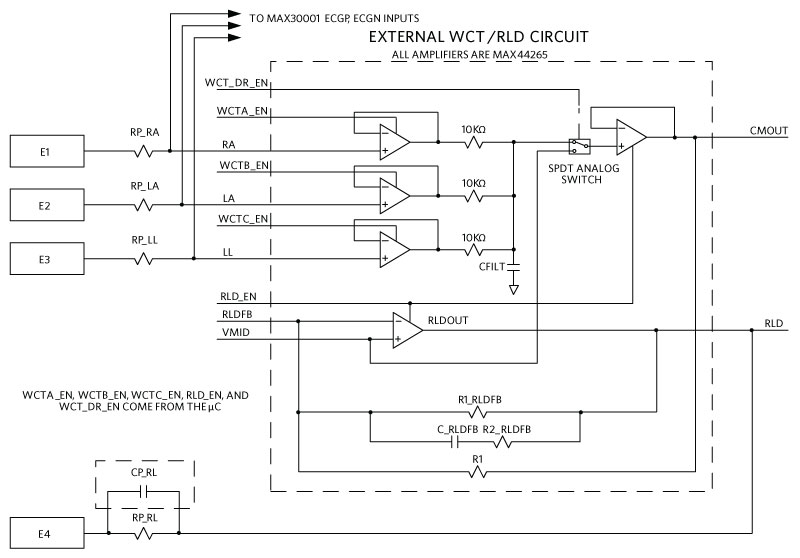 In this external WCT/RLD circuit, the WCT is formed by using voltage follower amplifiers on each limb electrode and then summing together the outputs of these followers using 10kΩ resistors. The CMOUT amplifier converts this summed signal into a low impedance output. The CMOUT signal can then be used to drive the inverting RLD op-amp. Gain is set to –(R1/R1_RLDFB) and should be set somewhere between -10V/V to -100V/V. This circuit can easily be extended to provide a WCT reference for more than three leads, such as lead V or lead VI. Use CMOUT to provide the (-) input to a lead V or lead VI differential amplifier.

Note that the circuit effectively sets the body bias at VMID, and that the closed loop works to remove any common-mode noise source within its closed loop bandwidth. Use one of the VCM outputs from a MAX30001 or MAX30003 device to provide this VMID voltage.

Instead of directly connecting the summing resistors to RLD (-), use the CMOUT amplifier to connect to RLD (-) through R1 to select the sum of two limb electrodes instead of three limb electrodes. This is helpful when one of the electrodes within the system becomes compromised, without changing the gain and stability characteristics of the RLD output amplifier. In this case, one can disable the compromised electrode's voltage follower within the WCT/RLD circuit to preserve a single, high quality lead.

Another fairly simple WCT/RLD circuit change can be made to support driving the shield signal of shielded cables. In this case, use another voltage follower amplifier in parallel with the CMOUT amplifier. Arranging this amplifier to drive the shielded capacitance in a stable fashion requires additional shield amplifier compensation components.

Select and combine the MAX30001 and MAX30003 ECG chips based on the number of leads desired and the necessary functionalities of the Holter device or health patch. The MAX30001 is an ultra-low power AFE with single channel integrated biopotential (ECG, R-to-R, and pace detection) and bioimpedance (BioZ). The BioZ path on the MAX30001 has been optimized for picking up respiration signals for vital signs monitoring. The MAX30003 is similar to the MAX30001 but only provides ECG and R-to-R detection.

As shown in Figure 1, the external WCT/RLD circuit requires a minimal amount of external components: five amplifiers, one SPDT analog switch, and a small number of passive components (i.e., resistors and capacitors around the op amps).

We chose to use the MAX44265, an op amp with high input impedance (typically 1GΩ in common mode and 10GΩ in differential mode). The low power (4µA typ/amplifier) and small size (0.9mm x 1.6mm, 6 ball WLP package) of these op amps allow for the external WCT/RLD circuit to be compatible with small battery-powered health patches.

There are several reasons why the electrodes can become compromised over time. Insufficient skin contact, a loose cable connection, or the drying out of the electrolyte layer are among the common causes.

If only a single electrode is compromised, the following steps can be performed:

For example, if the LA electrode is compromised, calculate

However, if two of the three electrode tissue interfaces of the WCT/RLD circuit are compromised, then drive a DC body potential instead of the summed output out on the RLD electrode.Use the SPDT switch to switch in VMID as the input to the CMOUT buffer instead of the summing resistor connections. One of the MAX30001/MAX30003 VCM outputs can be used to provide the WCT/RLD circuit's VMID voltage. Alternatively, one can generate a VMID voltage from a voltage divider using AVDD and GND as power supply references.