The MAXREFDES174# is a complete, high-accuracy, IO-Link® distance sensor reference design that provides accurate measurements for distances up to 4m. Built in an industrial form factor, the reference design makes use of a commercially available time-of-flight (ToF) laser-ranging sensor.

In this design, a Renesas RL78 (R5F10E8EALA) microcontroller interfaces between the distance sensor and the MAX22513 IO-Link device transceiver. The MAX22513 features an internal high-efficiency DC-DC buck regulator, two internal LDOs, and integrated surge protection for robust communications in a very small PCB area without requiring external protection components, such as TVS diodes. The MAX22513 is in a 28-pin TQFN package, allowing the MAXREFDES174# to have a tiny footprint of just 1.2in (3cm) in length. The design is reverse-polarity protected using the integrated active reverse-polarity protection of the MAX22513. The internal DC-DC buck regulator significantly reduces power dissipation, and the two integrated LDO regulators in the MAX22513 generate 3.3V and 5V, which reduces the number of required external components and saves space. The MAX22513 also features low on-resistance drivers (C/Q and DO/DI) to further reduce power dissipation, allowing this reference design to consume minimal power with very low thermal dissipation.

This sensor utilizes the IQ2 Development® IO-Link device stack to communicate to any IO-Link version 1.1-compliant master. The board contains a male M12 connector for connecting to a compliant IO-Link master using a standard M12 cable. Connecting the MAXREFDES174# to a USB IO-link master, such as the MAXREFDES145#, with the associated software allows for easy evaluation.

Design files, firmware, and software are available on the Design Resources tab. The board is also available for purchase. 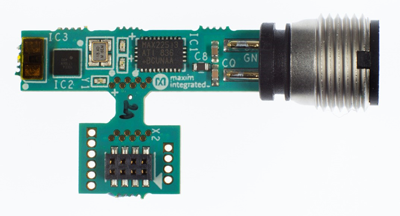 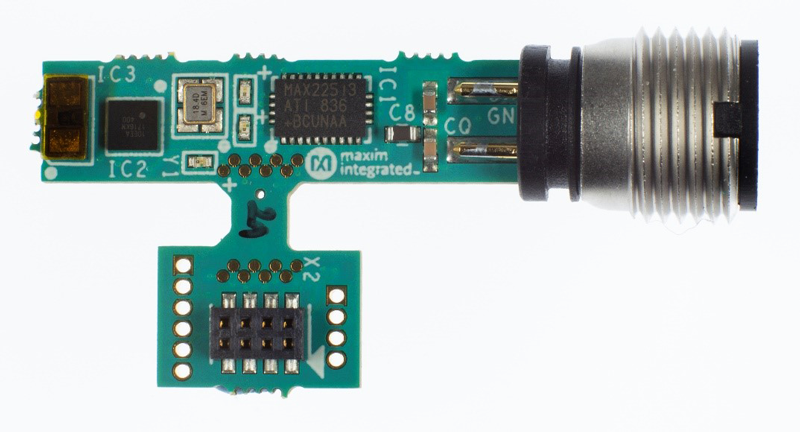 Advanced factory automation solutions (i.e., Industry 4.0) require an increasing number of smart sensors, which are typically controlled using IO-Link point-to-point serial communication between the sensor and controller (master). As a leading provider of IO-Link sensor transceiver and master transceiver ICs, Maxim also provides complete reference design solutions to help our customers improve their time to market. These proven designs cover all of the hardware and software requirements needed for compliance with the IO-Link standard. The complete reference design is provided on a 30mm x 7.5mm printed circuit board (PCB).

The MAXREFDES174# IO-Link distance sensor consumes minimal power, space, and cost, making it a complete solution for distance and proximity sensing in many industrial control and automation applications.

The DC-DC buck regulator significantly reduces system power dissipation by dropping to a lower voltage from 24V more efficiently than a linear regulator. The two integrated LDO regulators in the MAX22513 generate 3.3V and 5V, reducing the number of additional external components and the required space. The DC-DC regulator can supply up to a 300mA load current.

The MAX22513 features a flexible control interface through either an SPI or I2C interface. In this design, we use I2C to reduce the number of pins required by the microcontroller. I2C also allows both the MAX22513 and the sensor IC to be on the same bus. The I2C (or SPI) interface provides extensive diagnostics for the MAX22513, and a 3-wire UART interface is provided for IO-Link operation.

The VL53L1X is a ToF laser-ranging sensor that provides accurate distance ranging up to 4m (400cm). The ranging sensor is programmed with firmware and is controlled by a simple I2C interface with a preprogrammed device address of 0x52. The module does not have a cover for the receiving lens, so care should be taken to keep the lens clean. Distance measurement performance is impacted when the lens is dirty. The VL53L1X is in a small, 4.9mm x 2.5mm x 1.6mm, module and operates over the -20°C to +85°C temperature range. This sensor limits the reference design operating temperature range, as the MAX22513 IO-Link transceiver can operate over the -40°C to +125°C temperature range.

The MAXREFDES174# does not require external protection devices such as varistors or TVS diodes due to the integrated surge protection in the MAX22513 at the IO-Link interface. This reference design meets both IEC 61000-4-2 for electrostatic discharge (ESD) up to ±4kV and IEC 61000-4-4 for electrical fast transient (EFT) ±4kV standards. It is designed to meet a surge capability (2A at t = 1.2/50μs) up to ±1.0kV.

To keep costs low, the MAXREFDES174# uses an industry-standard M12 connector, which allows a 4-wire cable to be used.

The MAXREFDES174# consumes less than 9mA (typ). A green LED indicates the 3.3V alive signal, and a yellow LED blinks for each distance sensor reading. A red LED turns on to indicate when a fault occurs.

As seen in Figure 2, the MAXREFDES174# was verified using the iqLink® IO-Link Master, which features the MAX14819 IO-Link master transceiver, and the IODD interpreter tool iqPDCT®. 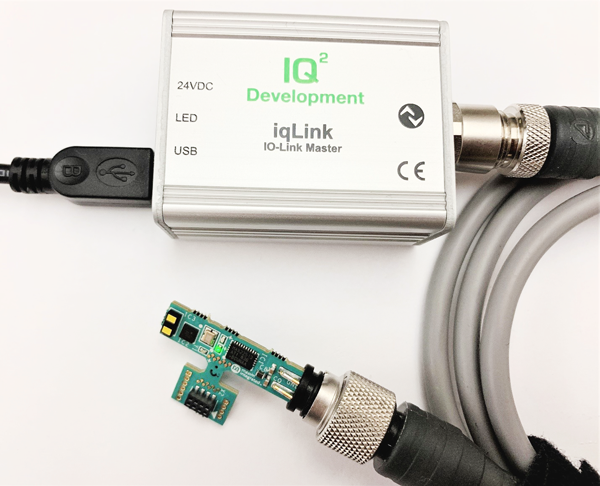 Download the IODD file (*.xml) located in the Design Resources tab and see the Quick Start Guide for step-by-step instructions on how to use the software. Figure 3 shows a screenshot of the IQ2 Development iqPDCT IO-Link device tool communicating with the master and sensor. 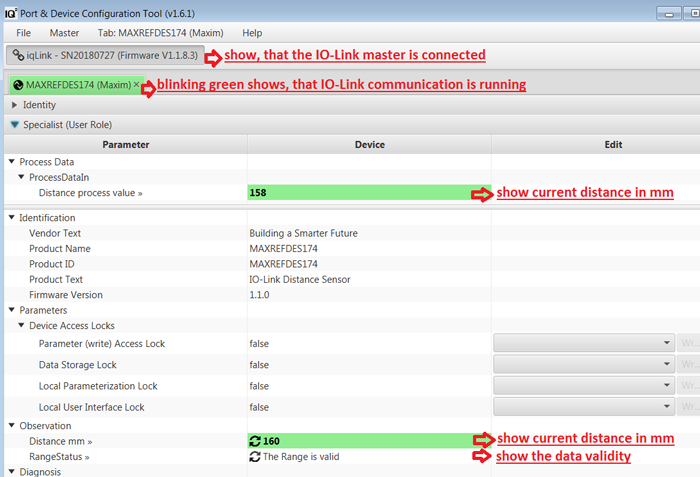 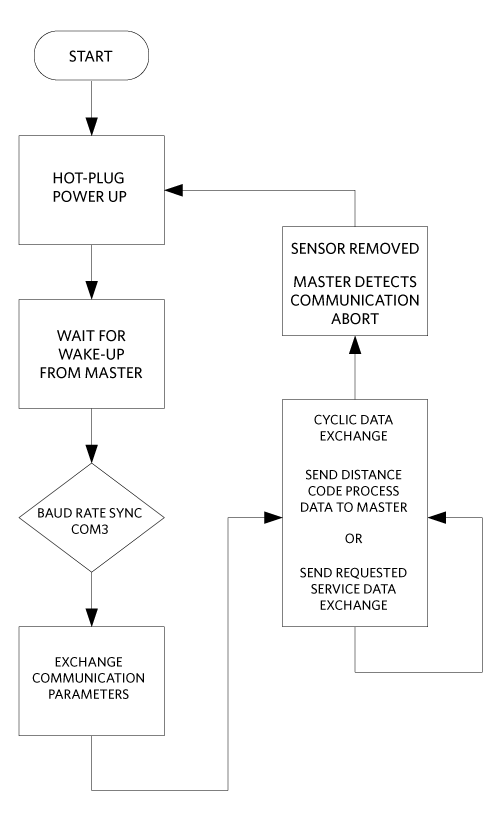 The IO-Link EMC requirements define two performance criteria. Criterion A requires no more than six detected M-sequence errors and no interruption of communication. Criterion B does not allow a change in the stored data or of the actual operating state (e.g., permanent loss of communication).

The general rules for the test configuration of a device (such as the MAXREFDES174#) are as follows:

The MAXREFDES174# was tested in a Maxim lab for the common industrial compliance standards, and the test methodology and results are presented. Although the IO-Link Interface and System Specification does not require surge testing, Maxim did this test in addition to the ESD and EFT tests.

The MAXREFDES174# module was tested to withstand up to ±1.0kV of 1.2/50µs IEC 61000-4-5 surge with a total source impedance of 500Ω. Surge testing was performed using the MAXREFDES145# IO-Link master, and 10 surge pulses were applied for each test as shown in Table 2. The MAXREFDES174# was not damaged by the tests.

The performed surge tests are defined as follows: 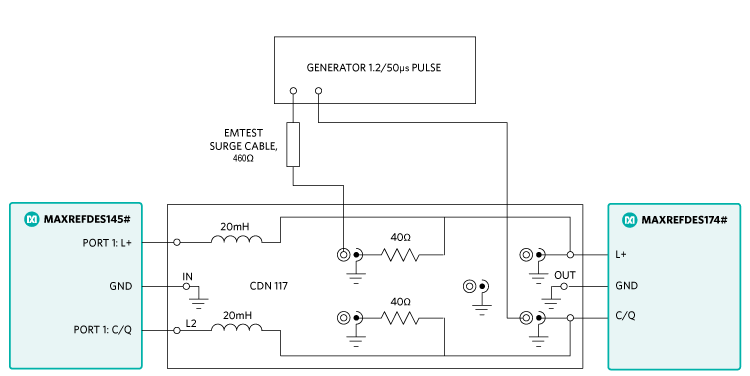 Using a 20m IO-Link cable with standard M12 connectors, the MAXREFDES174# was tested to withstand electrical fast transient (EFT)/bursts up to ±4kV according to IEC 61000-4-4. EFT. Testing was performed using the MAXREFDES145# IO-Link master, and EFT pulses were applied for one minute for each test, as shown in Table 3.

Repetition rates of 5kHz and 100kHz were tested, along with burst lengths of 15ms and 0.75ms. The MAXREFDES174# was not damaged by the test, and the MAX22513 registers were not corrupted.

Due to test equipment limitations, we were unable to count M-sequence errors. To validate if the MCU on the MAXREFDES174# was susceptible to EFT, it was programmed to generate square wave outputs to toggle the C/Q and DO pins. On the square-wave, disturbances that imply communication errors were not detected (i.e., the high and low levels were always within their range). 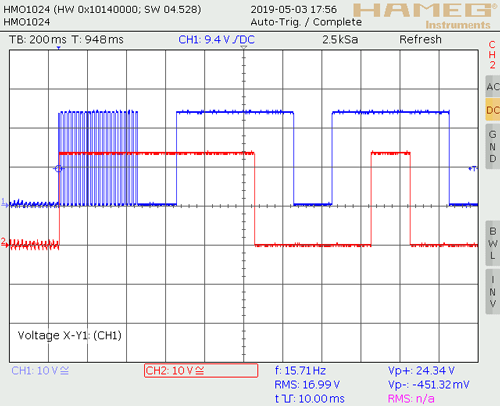 Note that the IO-Link Interface and System Specification Version 1.1.2 requires ESD testing with a 20m cable attached, and the ESD strike is applied to the sensor casing. Because this reference design is only a PCB with no metallic casing, the ESD strikes were applied to the male M12 connector pins. Maxim expects this design to meet the levels specified in Table G.2 when testing with a casing and cable (Table 1). 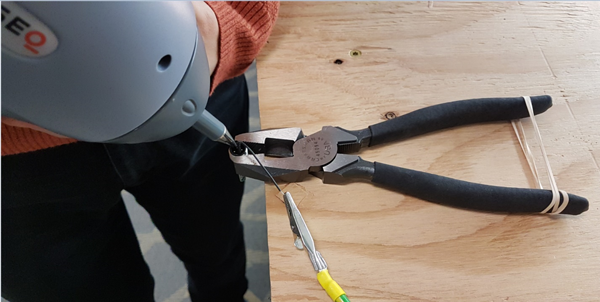 The MAXREFDES174# is designed and tested to meet IO-Link operation and harsh industrial environments covered by IEC 61000-4-x standards for transient immunity. This board and associated software are designed to be used to evaluate the performance of the MAX22513 but are not intended to be deployed as-is into an end-product in a factory automation system.

The MAXREFDES174# is not for use in functional safety and/or safety critical systems.

To test the MAXREFDES174# sensor, connect it to a port of an IO-Link master. In the following example, an iqLink IO-Link master is used, but any IO-Link compliant master and associated IO-Link device GUI should work. 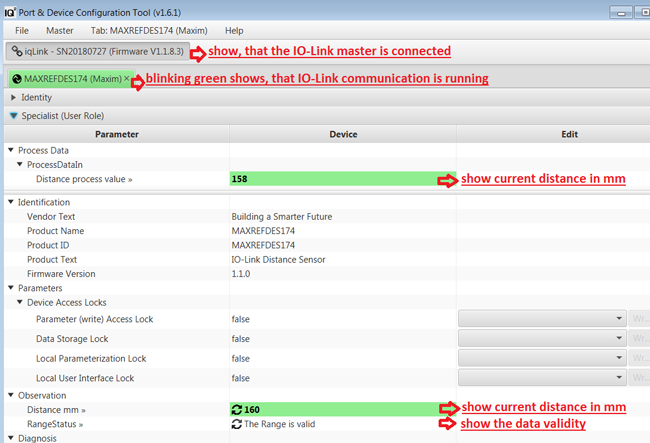