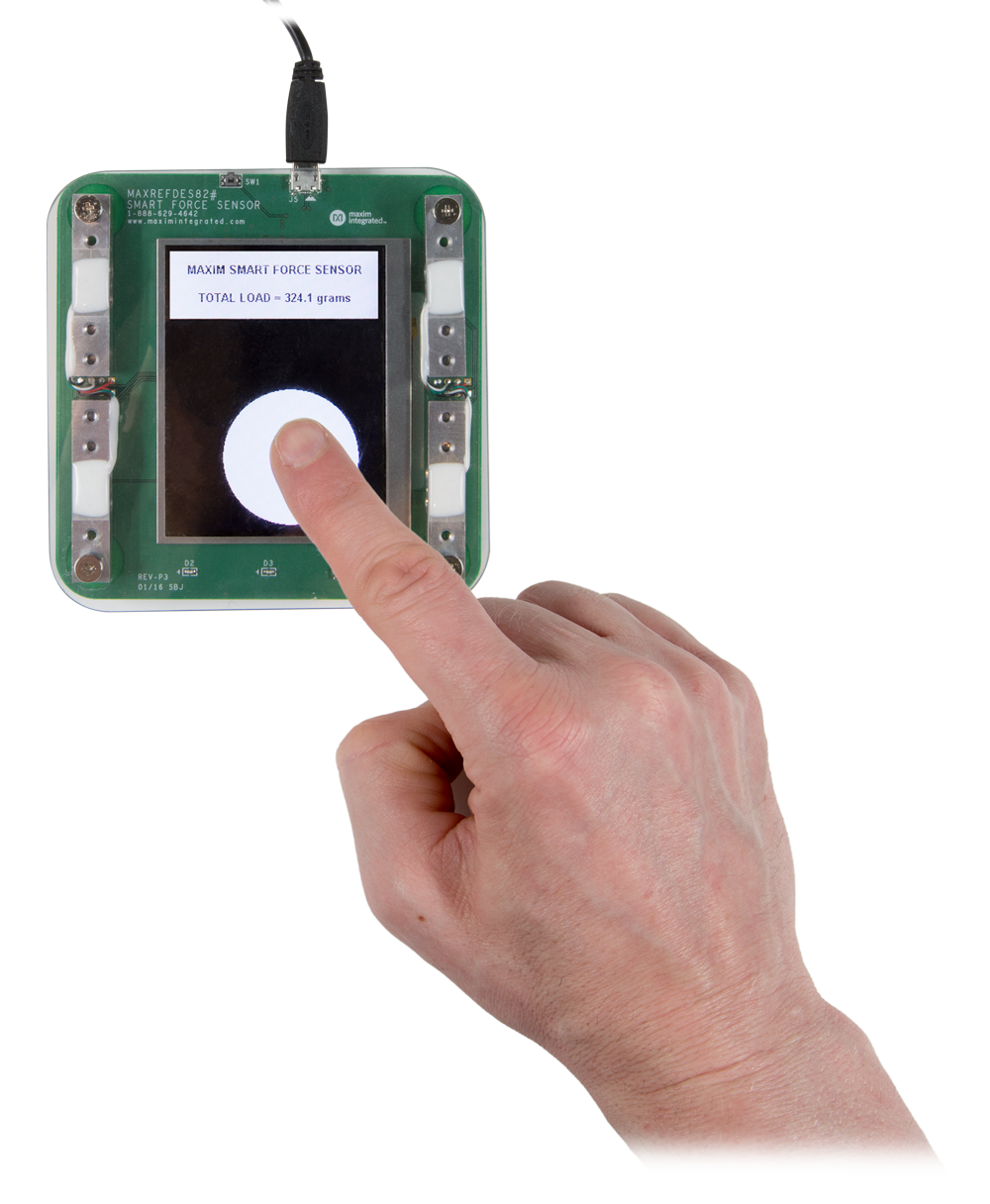 Technology marches forward, constantly and irrepressibly altering the world of human to devices interfaces. From mobile device touch screens to weigh scales with electrodes for body composition, machines continue to add more capability, and different ways to gather their measurements. Every so often, a truly elegant concept emerges, merging technology, design and simplicity. MAXREFDES82# is one such elegant concept.

This reference design is an industrial, smart force sensor. The design measures mass, as well as the center of mass of the object on it. This combination of features and speed means that MAXREFDES82# operates as both a weigh scale and a touch interface with force sensing. Built with a plastic plate, the system ideally meets the needs of industrial human machine interfaces (HMI).

The reference design features the MAX11254 24-bit, 6-channel, 64ksps delta-sigma ADC with SPI interface. Four load cells are mounted on a quadrant plane to detect touch forces applied on the flat plastic plate. Based on the forces applied on each individual load cell, the system displays the total force magnitude, and the coordinates of the force center. The force magnitude and coordinates are scanned approximately each 10 milliseconds.

The system includes a thin-film-transistor (TFT) liquid crystal display (LCD) module, digitally showing the forces on each individual load cell, and the total force applied on the top plate. The LCD module also graphically displays the force magnitude and the coordinates of the force center.

The MAXREFDES82# reference design consumes minimal energy and is powered by a USB port. A PC-side graphical user interface (GUI) program is also included to facilitate the human interface input demonstration and development.

The MAXREFDES82# reference design block diagram (Figure 1) demonstrates how a touch force and its movement are captured and used in a 3-dimensional (3D) human-interface input device. The design includes source files for the microcontroller to enable developers to quickly evaluate and customize the design for their specific applications with minimal firmware or hardware changes. The board is designed in a compact form factor for rapid evaluation or installation. When a touch force or weight contacts the surface of the top plate, the four strain-gauge load cells deform and output electrical signals to the MAX11254 ADC. Based on the distribution of the force to the four load cells, the system calculates the total force and the position of the force's center of mass. The system continuously scans the signal output of each of the four load cells, and an accurate force and its movement map can be acquired. Because the system gathers and monitors not only the force position, but also the force magnitude, the system is ideal for a 3D human interface input application.

The reset switch (SW1) resets the board, and the calibration switch is used to start a calibration procedure.

The MAX11254 IC lies at the center of the system. The device is a 6-channel, 24-bit delta-sigma ADC that achieves exceptional performance while consuming very low power. Sample rates up to 64ksps allow preci¬sion DC measurements. The MAX11254 communicates through an SPI serial interface and is available in a small (5mm x 5mm) TQFN package.

The device offers a 6.2nV/√Hz noise programmable gain amplifier (PGA) with gain settings from 1x to 128x. The integrated PGA provides isolation of the signal inputs from the switched capacitor sampling network. The PGA also enables the IC to interface directly with high-impedance sources without compromising available dynamic range.

In this smart force sensor design, the MAX11254 is configured as follows:

The developers can easily change the configurations to their specific requirements in the provided firmware.

For the touch application, the design features load cells from Phidgets Inc. The load cell capacity is 780g with a rated output of 0.8mV/V. The non-linearity is 0.05% FS, non-repeatability is 0.05% FS, and the temperature effect on span is 0.05% FS. Depending on the specific application and accuracy requirement, different load cells can be selected and replace the load cells mounted on the board.

Note: Do not overload the load cells for more than 10 seconds.

A micro-USB cable connected to a PC powers MAXREFDES82#.

Microprocessor and the LCD Module

The MAXREFDES82# reference design uses STM32F429 as the processor. The processor controls the ADC, the LCD module, and performs all computations. The TFT LCD module measures 3.5” across the diagonal with a resolution of 240x320 pixels. In this design, the upper section of 240x120 pixels digitally displays the load cells load information, the lower section of 240x240 pixels graphically displays the force magnitude and its relative positions in the square constructed by the four load cells.

The MAXREFDES82# firmware is based on an interrupt-driven design model. After power-up, the microprocessor configures the power domains, clock domains, LCD module controller, USB stack, virtual COM port (VCP), and other house-keeping tasks. Then the microprocessor enters into a loop, scanning the load cells and processing the data. The results are displayed on the LCD panel. The results can also be displayed on a PC GUI application. The GUI application communicates with the board through VCP communication. Figure 4 shows the MAXREFDES82# GUI application screenshot. Before connecting the MAXREFDES82# board to a PC USB port, the user should install the STMicroelectronics VCP driver. See the Quick Start Guide section for details.

When the reference design board receives power and finishes the power-up calibration, the board is in measurement state. Run the GUI application and click Connect button, the PC GUI displays the same information as the information displayed on the LCD panel. Follow the ensuing procedure to verify the correct functioning of the MAXREFDES82#.

The MAXREFDES82# design is verified and tested under typical application cases. The platform is targeted for any developer who uses the MAX11254 24-bit, multi-channel ADC to capture high precision analog signals in weigh scale and touch applications. The reference design is flexible to be customized for specific applications development, e.g., weigh scale applications, industrial control and automation application, etc.

Figure 5 shows the weight measurement of standard weight-set placed on the center of the top plate. Figure 6 shows the relative X-axis error of standard weight-set placed on the center of the top plate. Figure 7 shows the relative Y-axis error of standard weight-set placed on the center of the top plate. Figure 8 shows the weight measurement of standard weight-set placed on the center of the top left quadrant of the top plate. Figure 9 shows the relative X-axis error of standard weight-set placed on the center of the top left quadrant of the top plate. Figure 10 shows the relative Y-axis error of standard weight-set placed on the center of the top left quadrant of the top plate.