What happens when your younger sibling, who has diabetes, leaves blood-glucose test strips all over the house? You invent a belt-worn kit that holds new and used test strips. Or, how do you handle a Christmas tree that is too big to reach all the way around to decorate? You create a box that spins the tree so you can adorn its entire circumference. These are just a few of the inventions created by students participating in the upcoming California Invention Convention.

As with the 2018 version, this year’s California Invention Convention will be hosted at Maxim’s San Jose, California, headquarters. On Saturday, April 13, 2019, roughly 200 inventors from kindergarten through eighth grade will gather at Maxim to display and discuss their problem-solving ideas. Lots of volunteers will be needed to judge the submissions and also to help out the day before and the day of the event. If you’re 16 or older, there are many ways to lend a helping hand:

Of course, judging will be a big part of the event, in its fourth year for the state. Six to eight participants will be placed in a judging circle with a team of three judges. Judges will be trained beforehand, but the important criteria is really to be interested in listening to what each student inventor has to say about his or her invention and to ask lots of questions. Anyone who is capable of being able to determine whether students have successfully mastered problems by the way they talk about them and seeing how successful they were at solving the issues would make a great judge, says Brenda Payne, director of the California Invention Convention. “We are inviting anyone who loves to listen to young people talk about solutions in their lives, so (a judge) can be most anyone,” she noted. 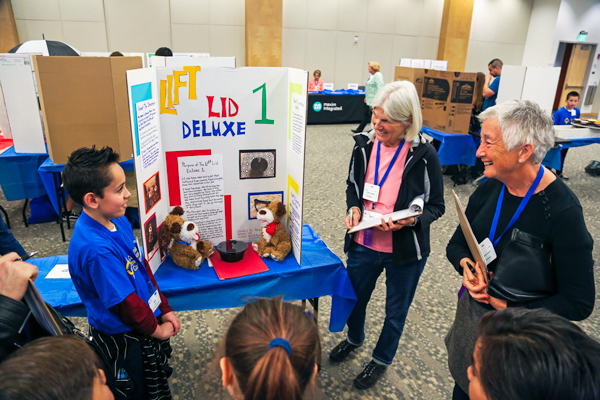 Turning Students Into Problem-Solvers
The main idea behind the California Invention Convention program is to empower students to be problem-solvers. The program is based on a 10-week, open-source science, technology, engineering, and math (STEM) curriculum, aligned to Next-Generation Science Standard/Common Core. Classroom lessons involve activities tied to coursework in any subject, including science, history, math, art, and music. Mentoring by teachers and parents guides the young inventors on their journey of identifying a problem to solve, coming up with an invention idea, and building a prototype of their solution.

The program’s curriculum is modeled after the engineering cycle. After students have identified a problem, they search for solutions that are already available and conduct research to deepen their understanding of the problem. Finally, the students build their own solutions, testing, redesigning, and rebuilding until they are satisfied. “We want kids to fail over and over quickly so they can become successful in their solution. We emphasize that failing is not a negative. By failing you are learning much more about the problem and the real solution,” explained Payne.

Students participating in the convention have an opportunity to win awards and also move on to the National Invention Convention and Entrepreneurship Expo (NICEE) from May 29 to May 31 at The Henry Ford Museum in Dearborn, Michigan. Last year, 15 finalists from California advanced to the national event, which is sponsored by The STEMIE Coalition, now a program of The Henry Ford. This year, 30 California students are expected to move on to the next level.

“Kids get to showcase their inventions right alongside Edison’s lightbulb, a true inspiration for students,” Payne said of the national event.

This year at the statewide level, the program has doubled the number of participating students to about 3,000, thanks in part to grants, partnerships, and additional services available from The STEMIE Coalition, according to Payne. Roughly 60 percent of the participants are girls, said Payne, adding, “This program is really helping with girls seeing themselves as engineers.”

Lend a Hand or Stop By for Inspiration
Anyone is welcome to stop by the California Invention Convention during the open-to-public hours of 11a.m to noon on April 13. “We are excited about the prospective inventions that will be coming through. They’re always inspirational,” said Payne.

And, if you’re available to help out, Payne and team welcome your support. Get details about volunteering, including registration, from the California Invention Convention website. For real-time video of the event, follow Maxim's Facebook page for a Facebook Live broadcast ›