Industry 4.0 is no longer a concept; it’s been happening, and it probably has been happening for longer than you realize. According to Suhel Dhanani, the questions now are, how can we best implement the infrastructure for Industry 4.0 and what are the technology drivers?

Dhanani, a director of business development in Maxim’s Industrial & Healthcare Business Unit, shared his insights during a talk at this year’s embedded technologies expo & conference in San Jose. Manufacturing is getting digitized. There’s a lot of valuable data being captured and analyzed to predict failures, optimize equipment usage, drive new flows of services, and more, he noted. Compared to the consumer internet of things (IoT) world, the industrial IoT generates more immediate ROI, which justifies the spend to develop the automated infrastructure.

He shared three examples that not only highlight the benefits of the industrial IoT, but also demonstrate that it’s a phenomenon that is not entirely new.

To capitalize on the flow of digital smarts, factories are being rearchitected and intelligence is moving to the edge, Dhanani said. Think of a pyramid, where the intelligence-rich edge layer sits at the very bottom, followed by the control layer, the supervisory layer, and, at the top, the management layer. In the industrial world, many decisions have to be made in real time, so it makes good sense to place the intelligence at the edge. As an example, Dhanani highlighted a proximity sensor that detects a dangerously close human presence. In this case, this piece of data doesn’t need to go up the pyramid to the management layer for a decision. A decision needs to be made right away so that the appropriate action can be taken (shutting off the motor, or bringing the equipment to a safe speed, for instance).

The changing architecture of the factory is, in turn, driving two big changes, according to Dhanani. One, we are seeing increased growth in micro PLCs. In addition to being smaller, these PLCs are also called upon to do more. They’re more widely distributed around the factory floor, and they need to be designed with components that don’t consume too much power. For example, optocouplers used for isolation are quite large and generate quite a bit of heat. So, there’s a move to digital isolation, which, by comparison, is a fraction of the size and consumes just a fraction of the power. 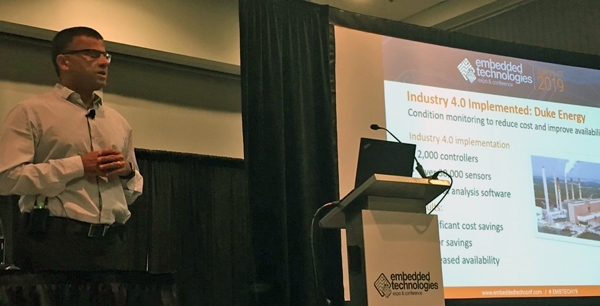 The second big change, Dhanani explained, is the growth in the number of sensors used on the edge layer and the changes in sensor architecture (they’re smaller, more intelligent, and connected). Semiconductors, he noted, are enabling the smaller sizes and increase in channel density. As an example of this, he highlighted the evolution of Maxim’s PLC reference designs. The Micro PLC demonstration platform from 2014 was a first-generation industrial control chipset that reduced a PLC’s footprint by 15x. Two years later, the company launched the Pocket IO PLC demonstration platform, which showcased the capabilities of adaptable manufacturing in less than 10 cubic inches. The latest solution in this series, released in the fall of 2018, is the Go-IO PLC reference design, which provides multiple software-defined I/Os in less than 1 cubic inch.

In closing, Dhanani noted that everyone in the industrial world knows that Industry 4.0 drives operational efficiency. But fully realizing its vision requires lots of small, efficient, and rugged semiconductors.