Today's consumer electronics landscape is dotted with tiny, battery-powered wearables, hearables, and other "ables." With a processor, speakers, microphones, multiple sensors, and radios, these devices struggle with opposing trends: there are more power rails at lower voltages and currents, yet conserving precious battery life is also essential for a good user experience. A wearable device, for example, might feature these rails: 3V at 20mA for RF, 1.8V at 20mA for digital functions, and 3.2V at 75mA for the motor drive. A smartphone could have rails ranging from 1.1V at 20mA to 1.8V at 300mA. Given the requisite tiny form factors of these battery-powered products, independent, point-of-load power rails are not feasible in these designs.

For today's battery-powered devices, a single-inductor, multiple-output (SIMO) power converter architecture is ideal for meeting the dueling design challenges. In a SIMO architecture, a single inductor supports multiple outputs, reducing the number of required inductors, therefore reducing the solution size, all while maintaining switching converter efficiencies. In a converter designed with the SIMO architecture, a proprietary controller ensures that all of the outputs are serviced in a timely manner. This is the case even if there are multiple outputs seeking energy stored in the inductor. When there aren't any regulators requiring service, the state machine rests in a low-power rest state. Once the controller determines that a regulator needs service, it charges the inductor until it reaches its peak current limit. Then, the inductor energy discharges into the output until the current reaches zero. Should multiple output channels require servicing simultaneously, the controller makes sure that no output uses all of the switching cycles. 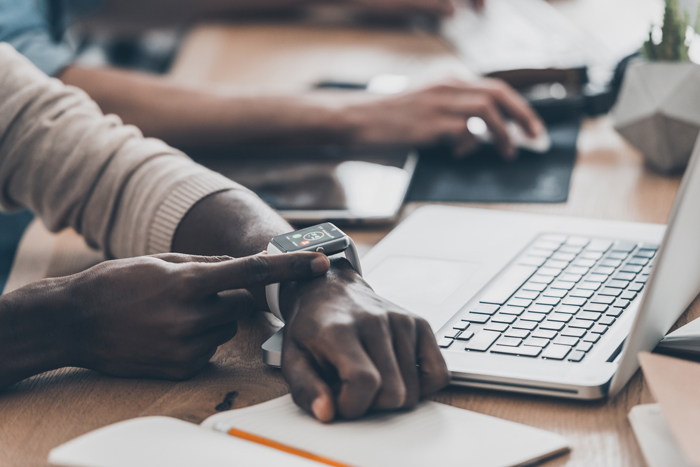 Smartwatches are just one example of a small, battery-powered electronic device that can benefit from SIMO power supplies.

A converter based on the SIMO architecture and featuring low quiescent current is particularly ideal for tiny devices that are expected to have long battery life. In a power supply, the quiescent current is often the biggest contributor to a system's standby power consumption. By lowering quiescent current, you're in a better position to create designs with efficient power and long battery life. By comparison, a traditional switching-regulator topology is architected such that each switching regulator requires a separate inductor for each output. This is great, but inductors are relatively large and costly, so they're not beneficial for cost- and space-constrained devices such as hearables and wearables. You could instead choose a linear regulator for these designs – they are fast, compact, and low noise, but they are also lossy, which compromises battery life. Another option is a hybrid of multiple low-dropout regulators (LDOs) with DC-DC converters, but this approach yields a larger design versus using LDOs alone. A SIMO architecture overcomes these tradeoffs.

Aside from saving space and costs and delivering high efficiency, a SIMO architecture offers various other benefits compared to what can be attained using separate DC-DC converters:

Tiny SIMO Converter with Low Quiescent Current
Maxim has introduced the market's first standalone SIMO buck-boost converter with the lowest quiescent current and the smallest solution size for small, function-rich, battery-powered electronic devices. The MAX17270 nanoPower buck-boost converter replaces clusters of power rails while extending battery life with a quiescent current of just 850nA for one SIMO channel and 1.3µA for three SIMO channels. It regulates three outputs with a single, small 2.2µH inductor at efficiencies up to 85%. Shutdown current is at 300nA and operating current at 1.3µA. Given the low power consumption, designs developed with this converter are protected from overheating and needing too many charging cycles. Compared to previous-generation SIMO-only solutions, the MAX17270 is 50% smaller. So, in a smaller board space, you get better total system efficiency than equivalent power solutions using a single buck and linear regulators.

Typical operating circuit of the MAX17270.

The SIMO configuration can utilize the entire battery voltage range because it can create output voltages that are above, below, or equal to the input voltage. To optimize the balance between efficiency, output ripple, electromagnetic interference (EMI), PCB design, and load capability, the peak inductor current for each output is programmable. The MAX17270 provides an efficient power management option that's great for a variety of streamlined designs. It's part of Maxim's portfolio of SIMO power solutions. The buck-boost converter is also part of our portfolio of nanoPower devices. Our nanoPower devices require less than 1µA of quiescent current, ideal for compact, connected electronic products. So, when you're ready to work on your next hearable, wearable or similar design, keep in mind the advantages that the SIMO architecture together with nanoPower technology can bring to your applications.