With more than one billion automotive ICs shipped, Maxim has a long history of success in the automotive market. Leading the charge is Randall Wollschlager, vice president and general manager of the company’s Automotive Business Unit and one of two design engineers on Maxim's first automotive-defined IC. I sat down with Randall recently to talk about how automotive electronics have evolved and what the road ahead looks like. Listen in. 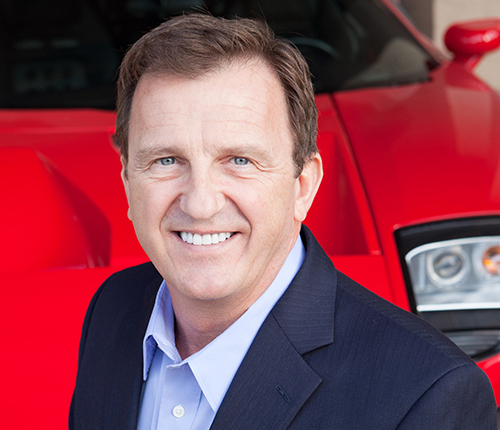 Tell me about that first Maxim automotive chip.

It was 2006, and the first part we did was the MAX13362 24-channel automotive switch monitor, which provides an interface between mechanical switches and low-voltage microprocessors or other logic circuits. Mechanical switches in the car fail because the physical contacts oxidize over time. These switch monitors are connected to the switches to detect contact position and to burn off contact oxidation, which extends the lifetime of the switch. The part is still in production today.

It was a challenging market at the time, but I was among a few believers who persisted. Kent Robinett, now VP of automotive business management, and Kevin Schemansky, now executive director of product definition, were also part of this dedicated team that tirelessly supported expanding this business. I moved over to automotive from our mobile team, where I had been leading new product development, and saw ways to apply the smartphone experience to automotive infotainment systems. The automotive electrical system is one of the harshest and most poorly regulated environments known to man, but it’s a good long-term business to be in if you can provide robust ICs that can survive in that environment.

Maxim is uniquely positioned to provide the smartphone user experience in the automotive infotainment system, since we have been developing smartphone ICs for over a decade. Early on we identified opportunities to take Maxim consumer products and create automotive-grade versions. And we’ve built upon our reputation for solving very difficult engineering problems. Engineers who work on our automotive technologies tend to be long-term employees, which has enabled us to organically grow our expertise in this industry.

Did you have any inclination back then that we would be moving now toward self-driving cars?

They were not on our radar screen at all. In the 2000s, infotainment and the center stack became more important for cars. When things are changing in a market, it’s a great opportunity to get in, so we focused on infotainment and clusters in front of the driver. We also began investing in exterior lighting, battery management systems for electrical vehicles, USB ports, and switch-mode power management, and leveraging our expertise in laptop backlight display drivers. Technology started to infiltrate parts of the car that had not had any technological advancement in 100 years!

What have been some of the biggest changes in automotive design over the years?

When I first worked in this industry in the 1990s, the OEMs (the automakers) specified and designed many of their own electrical modules. Now, in some cases, the OEMs decide whose parts they want to use and direct external module suppliers, also known as Tier 1s, on which IC supplier to use. The Tier 1s then work with the chosen vendor to build the components and subsystems. So, for example, if a camera supplier uses a serializer from one particular IC vendor, then the head unit supplier must use a deserializer from the same vendor, as determined by the OEM. We must work directly with the OEMs and the Tier 1 suppliers.

What are the biggest technical challenges facing automotive designs today?

What’s happening right now in the car is an absolute explosion of data processing. We never had a need for this in the past. Fully autonomous cars will have about 3000 Watts of compute power in them—it’s like running two hair dryers full blast in the trunk of your car. The number of CPUs is also dramatically increasing as more functionality is added to the vehicle.

Quality and longevity of vehicles will continue to be important considerations. Now, you only drive the car when you need to get from point A to point B, otherwise the vehicle sits idle. But with ride-sharing services and, eventually, autonomous vehicles, cars could be utilized nearly 24 hours a day.

So what kinds of cars will we be driving (or not!) 10 years from now?

Autonomously driven vehicles is definitely the final goal, but the next move will likely be the connected car. Connected cars are already using Wi-Fi at your home to upgrade software programs and are already receiving signals from satellites, which enable entertainment and GPS navigation. In the future, the car will communicate with other things like traffic signals, signs, cell phone towers and, possibly, with other vehicles. Imagine the stoplight turning green for you when it senses that there’s no other traffic around. We’re going to need stable working surfaces and improved seating. We need to enhance stability for occupants, so we’re not bouncing around while we’re trying to work on a laptop. There may be times when you’ll want to lie down for a lap, or simply lean back. There will also be more HD (high definition) and bigger displays, because we’ll have more time to use the screens for entertainment or work-related activities.

The car of the future won’t have mirrors—there will be cameras and displays instead. And no blind spots. We’ll have 4K displays because, in a self-driving car, entertainment will become more important. The amount of data being pushed around the car from radar, lidar, video systems—it's all digital. It's all going to be on these high-speed links, such as Maxim's GMSL (Gigabit Multimedia Serial Link) SerDes technology.