Picture this: It’s almost Halloween and you want to create a frightfully fun experience for trick-or-treaters. Setting up jack-o-lanterns and tombstones on the lawn doesn’t seem to be enough in this digital age. You need movement, like animatronics that leap to life when someone walks by! Making creatures move based on some corresponding action can be accomplished by a variety of controller trigger technologies, including pressure sensing mats, manually operated buttons, and beam sensors.

Similarly, if you want to secure a large room, you’ll want to put “eyes” on all corners and sections of the space. For security, a traditional way to get such a wide-ranging view of a room would be to install multiple cameras or motion-detecting alarm sensors, but this would involve a more complex system integrating multiple feeds.

Fortunately, today’s presence-sensing technologies are making it easier for us to create lively, movable holiday displays, not to mention more robust security systems. Infrared (IR) array sensors are enabling systems that detect not only someone’s presence but also the direction in which they are moving. This technology can also be useful in applications in areas like thermography, night vision, and medical imaging.

Smart sensors began appearing on the market through the encouragement of the U.S. Strategic Defense Initiative (SDI). Publicly announced by then-President Ronald Reagan in 1983, SDI, nicknamed “Star Wars,” was proposed as a missile defense system designed to protect the country from ballistic nuclear weapons attacks. Smart sensors now play an integral part in security and other smart, connected systems (a.k.a. the internet of things (IoT)). By integrating sensing, signal extraction, processing, and comprehension, smart sensors provide the intelligence that these applications need to be effective. By the late ‘90s, as costs for uncooled arrays came down and technological advancements persisted, the use of infrared technology began to be utilized more for both military and civilian purposes (such as automotive collision avoidance systems, medical diagnostics, and environmental control).

Uncooled IR sensor technology has continued to advance, particularly with the emergence of microelectronic systems (MEMS)-based pixel structure. Here, free-standing thermal isolation structures are adopted with thin-film IR absorbers. Using this technology, you could develop systems that measure radiated power to remotely determine an object’s (or body’s) temperature. With today’s semiconductor technology, we can develop thermopile sensors made up of hundreds of thermocouples over several square millimeters. This type of sensor is very sensitive and small, provides fast response time, and is relatively inexpensive, making them ideally suited for consumer devices, medical instruments, security systems, people counting, building automation, and the like.

Panasonic offers an 8x8 thermopile array called Grid-EYE®. This 64-pixel IR sensor fits within a reflow-compatible surface mount (SMD) package consisting of an RF-shielded metal cover, a MEMS sensor chip, a digital ASIC with an I2C interface, and a silicon lens through which the infrared energy passes.

In operation, Grid-EYE first absorbs emitted thermal energy across a 60-degree field of view. Each one of the array’s 64 sensing elements converts the thermal energy it absorbs into a proportional output signal. All 64 temperature signals are then amplified, converted from analog to digital and referenced against an ambient temperature value supplied by the thermistor, and are then transmitted out of the sensor to a microprocessor. The microprocessor then performs calculations that map temperatures from the individual thermopile elements into a complete thermal representation of the entire field of view, explained Eric Johnsrud, product specialist for sensor technology for Panasonic. From this thermal representation, it’s possible to detect moving people and objects as well as the position and presence of motionless people and objects, the direction of the movements, and accurate surface temperature from -20°C up to +100°C. 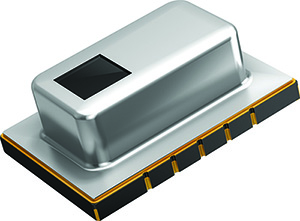 Panasonic Grid-EYE is an 8x8 thermopile array that works in horizontal and vertical orientations.

Panasonic’s Grid-EYE works in both horizontal and vertical orientations with a maximum recommended detection distance of 7 meters and frame rates up to 10 fps. To learn more about thermopile arrays and Grid-EYE, download Thermopile Arrays Open Up A New World Of Automation Applications.

Range of detection is an essential consideration when using IR sensors in an application like security. Of course, the longer the range, the better. To help designers prototype proximity- and directional-sensing applications, Maxim offers the MAXREFDES131# reference design featuring the Panasonic AMG8833 Grid-EYE and a Maxim 1-Wire bus, enabled by the DS28E17 1-Wire-to-I2C master bridge. The DS28E17 interfaces directly to I2C slaves at standard (100kHz max) or fast (400kHz max) speeds, converting the 1-wire communications protocol to an I2C master I/O, explained Justin Jordan, member of the technical staff in Maxim’s Micros & Security Business Unit. The DS28E17 bridge extends I2C communications distance to, typically, 100m at standard speed for a properly configured network. By comparison, the length of an I2C bus in typical applications is limited to only a few meters in standard mode, as its maximum distance depends on the capacitive loading, Jordan noted.

An alternative means to extend the I2C bus distance (and operate above the maximum allowable bus capacitance) is to operate at a lower speed, use higher drive output devices, divide the bus into segments with bus buffers, or use switched pullup circuits. However, these methods typically either fail to meet the long-distance requirements or add substantial cost to your design. The MAXREFDES131# reference design comes with example source code for the ARM® mbed™ and Arduino platforms, as well as schematics, layout files, fab files, and the bill of materials (BOM).

Building automation applications—such as energy, lighting, and temperature control—can also benefit from IR sensor technology. The ability to detect when someone enters a room, for instance, can trigger the lights to switch on and the HVAC system to adjust to a preferred temperature. To help designers integrate legacy systems with modern control and communications, Maxim offers its building automation shield, the MAXREFDES130# reference design. The MAXREFDES130# features a 1-Wire master bus for use with MAXREFDES131#. With the MAXREFDES130#, which provides an Arduino form-factor shield that’s compatible with the ARM mbed and Arduino platforms, you can prototype a variety of building automation designs. Whether you’re developing a clever holiday-themed animatronic display, a home security system, or a building control design, smart sensor technology can provide the proximity-sensing capabilities needed to make these systems effective and, in turn, worthwhile for end users.