This Saturday, May 4, is Star Wars Day. What better way to celebrate than by channeling your engineering force to create something that pays homage to this enduring sci-fi classic? The clever community on Hackster.io has shared a treasure trove of hardware-based, “Star Wars” movie-themed projects that you, or any maker at heart, can tackle. Chances are, you won’t need to play any Jedi mind tricks to bring these electronic gadgets to life.

Star Wars Droid Translator Helmets
Want to speak droid? With these helmets, you can look and sound like a droid and talk with other droids (They’ll have to wear a helmet, too, so you can understand each other!). Minimum Effective Dose created this battery-powered project with a host of components, including an Adafruit sound board, a Class D audio amplifier, a throat microphone, a small speaker, an H-777 radio, and a Wi-Fi development kit.

This project, however, comes with a bit of a disclaimer: there’s no actual translation of droid language. Still, the helmets are a fun demonstration of voice transmission technology. The throat microphone used is immune to ambient sounds, but works when the helmet wearer is speaking very softly and contributes to the illusion of droid-to-droid communication. 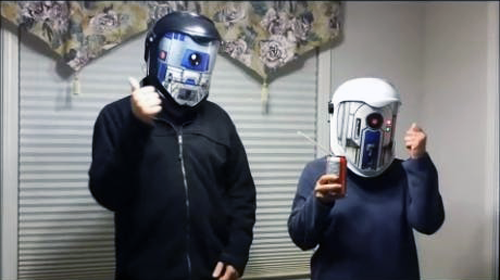 DIY Lightsaber
STEMpedia shares instructions on how to make your own lightsaber using the evive open-source embedded design platform, rainbow-colored LED lights, the Arduino IDE, and non-electronic parts that you can find at a typical crafts store. Notes the project story: “We all have imagined ourselves as one of the Super Heroes of the Star Wars universe, fighting the enemies with our LED glowing swords or the lightsaber. A typical lightsaber is an energy sword containing plasma. But the lightsaber which we are going to make contains the RGB strips, thus making the sword glow.”

With STEMpedia’s step-by-step instructions, you’ll be ready to protect and defend in no time. Death Star Word Clock
Make this word clock that resembles the Death Star, courtesy of Jordy Moors. This creation uses hardware components including the Particle Photon Wi-Fi development kit, an Arduino mini MP3 player, and an Adafruit RGB LED matrix. It’s attractive, functional, and even has sound. Notes Moors in his project story: “Hardware can’t do a thing without software, and that’s where the ‘magic’ happens. Like I mentioned before, I wanted something ‘more” than just a ‘normal’ word clock. I wanted something cool. I ended up putting different modes on it which you can use.”

So, the clock tells time, and you can change the colors of the text. It also provides matrix animation, the “digital rain” from the Matrix movies. Using controls via a web browser, you can play Snake (“This might not be Star Wars related, but it’s still really cool,” notes Moors.). And with the MP3 player and some external speakers and a microSD card, you can integrate sound to the clock (Star Wars theme song, anyone?). 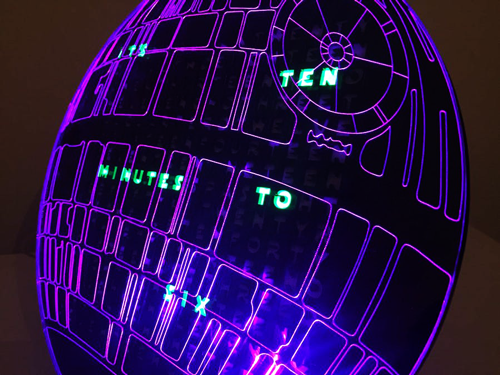 Darth Beats (Vader Beats)
A Raspberry Pi Zero Wireless, SparkFun Pushbutton switch, and a Pimoroni Speaker pHAT are the key ingredients for this crafty Darth Vader-themed MP3 player. TeCoEd transformed a LEGO Darth Vadar Minifigure Clock into this musical creation. “The most challenging part of the project, which tested my resilience and perseverance,” according to the project story, “was fitting all the hardware (Pi, Speaker pHAT, wires, more wires, buttons) into such a small space, which measures only 6cm x 3cm x 3cm. I had to use the Dremel tool to remove a lot of the insides and make room for the Pi and other hardware.” 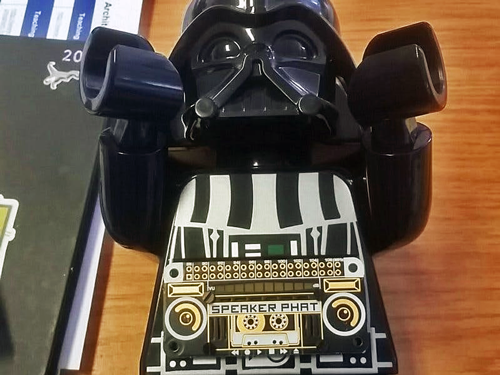 Kitchen Appliance Monitoring with BB-8
You’re heating some water in an electric kettle for a cup of tea, but then you get distracted. So the heated water sits there, cooling as you take care of your other tasks. Wouldn’t it be great to get an alert when the water has reached your desired temperature? That’s where the BB-8 appliance monitoring system from Brian Chamberlain comes in. You can let the droid keep an eye on things—and tell you when the water is boiling, the toast is ready, etc. Hardware components include the Particle Photon development board, a Class D audio amplifier, a high-frequency wire lead current transformer, a breadboard-friendly RGB Smart NeoPixel, and an enclosed speaker set from Adafruit.

Chamberlain notes in his project story: “The electromagnetic force is a powerful ally. It flows through the devices that run our lives. With the right sensor it’s possible to view these invisible forces and harness them for great good (or to let you know when your tea water is ready). Building this project won’t make you a Jedi but it will teach you a thing or two about using the Photon’s ADC to measure electric current of an appliance and its DAC to play a WAV audio file through a set of speakers.”

Get the full details, including schematics and code, from Chamberlain’s Kitchen Appliance Monitoring with BB-8 project These are just a few of the dozens of Star Wars-themed projects on the Hackster.io community. In the wise words of Yoda, “Do. Or do not. There is no try.” So, what are you waiting for? May the fourth be with you!